Jordan Newton was clearly one of the most complete football and baseball players to play the respective sports at LCHS.  He is remembered for his tireless work ethic on and off the field, along with a strong desire to succeed.  He ranks fourth all-time in rushing with 3140 yards and scoring 44 touchdowns over his three year varsity football career.  He also ranks high in numerous baseball statistical categories, and is arguably one of the best catchers in the history of LCHS baseball.

From Eric Hughes – Jordan was a player that could change a game in many ways.  As a catcher his presence usually prevented teams from even attempting to steal bases.  At the plate he brought power that could put runs on the board quickly.  He also possessed speed that helped him in all phases of the game.  Jordan had many great moments during his baseball career at LaRue County.  The one that will always stand out for me was his home run at Whitaker Bank Ballpark that put the 2003 team into the Final Four of the state tournament.  It was a 13th inning blast over the scoreboard in left field. Jordan was blessed with great athleticism and a good combination of strength and speed.  However, he also worked very hard to stay in shape and develop as an athlete.

From Rodney Armes – Jordan was a tremendous athlete, and clearly one of the best all-around athletes I ever coached.  He took it personally when a former coach told him he’d never make a football player, so he dedicated himself to the weight room to prove him wrong.  He was always self-motivated and worked tremendously hard on his strength and fitness.

From Chris Price – Jordan Newton without a doubt was the hardest working player I’ve been around in terms of working on both strength and conditioning and his skills in baseball. He worked tirelessly in the weight room, in the batting cage, and on the field. Jordan made it his mission to improve in all areas. He was a phenomenal athlete at the catcher position which made him extraordinarily valuable. The rare combination of speed, quickness and power made him a dominating player. 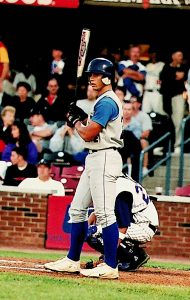