Tony “Eight ball” Smith was a three-sport standout for the Hawks in the early to mid-70s.  He was a first team All-District, All-Area and All-State in Football and Track.  He holds several track records specifically in the 400-yard event along with the mile relay.  In football he hauled in 50 catches for 849 yards and 7 TDs.  He had 1-100 yard receiving game.  Please note that this was during an era where teams would exclusively run the ball.

Smith would play football at Eastern Kentucky University, and would transfer to Murray State to run track (200, 400, 1600 meter relay) for three years.  He would help his team win the OVC Championship in 1980. After college, Tony joined the US Army where he served our country for twenty-three years.  Tony is currently working in Germany as a department of army civilian.  His current hobby is bowling where he has (8) 300 games on record.

From Grant McCullum – His nickname was “Eight ball” and also the “Pepper” in Salt and Pepper.  “Salt” was my friend Jerry Smith who was the quarterback and threw many passes to Tony.  In the District Championship game Tony caught three touchdown passes which was an average Friday night for him.  He also played defensive end and all special teams.  Tony was an all-around great athlete…  He also played basketball, and ran track.  A senior Hall of Fame and L-Club member.  Most importantly Tony was, and still is a great friend.

From John Sullivan – As a coach and leader of young men, I strove to instill a strong work ethic, respect, and hard work in our future leaders.  To those who chose to accept those attributes, success would be inevitable in any venue those chose.  It is without a doubt that Tony Smith embraced those qualities and the man he has become today is testimony to his great character.  Tony was a joy to coach.  His thirst for knowledge of football made him a great student of the game.  He was always coachable, gave 100 percent, a positive leader on and off the field, and always a gentlemen.

From David Brown – Tony was one of, if not the best pure athlete that I had the opportunity to play with, and have actually seen over the years at LCHS.  He had great such great hands.  Jerry Smith would always say that all he had to do was throw it up, and Tony would go get it.

From Phil Eason – I was a young assistant Coach when Tony played and I was in awe of him as an athlete given how smooth and effortless his athletic ability appeared to be. As a player the two words smooth and effortless described Tony. This awe was also in how he treated people. Regardless the person he always treated then with respect and kindness. I was always impressed by Tony the athlete, and Tony the person. 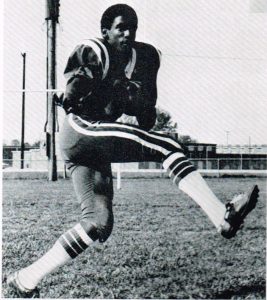 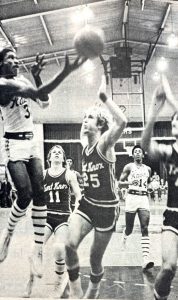 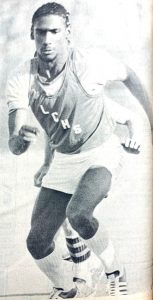