In an effort to acknowledge and honor some of the players who have contributed to the LaRue County Lady Hawks history, we will be recognizing players whose numbers have been retired.  Tonight’s deserving honoree is Mrs. Verda Dunn Hacker.  Verda played for the Lady Hawks from 1975 to 1981.  She was a three time member of the 18th District All-Tournament Team and was ranked as one of the top 20 players in the state of Kentucky for her senior season.

She finished her career with 1,701 points, which was the most in school history for 17 years after she graduated.  Currently, she is 5th on the all-time list.  She recorded her 1,000th point on January 14, 1980 during her junior season.  She was selected to the Courier Journal second team all-state team following her senior season.

Please help us honor Verda Dunn Hacker and thank her for her contributions to the Lady Hawk Basketball program. 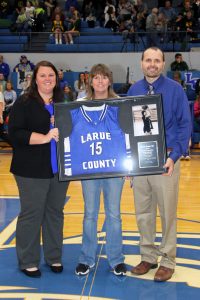 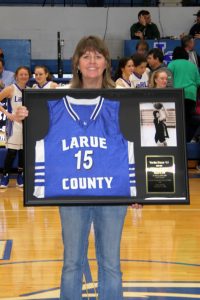 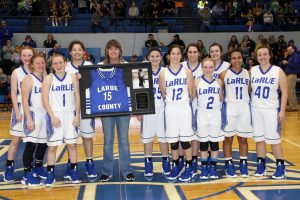