In an effort to acknowledge and honor some of the players who have contributed to the LaRue County Lady Hawks history, we will be recognizing players whose numbers have been retired.  The first of these deserving honorees is Miss Lisa Phillips.  Lisa played for the Lady Hawks from 1984 to 1990.  Remembered by her teammates for her intense competitiveness and ability to get those around her to play harder than they thought possible, she was just as productive as she was motivational.  She finished her career with 1,601 points, which ranks her 6th on the all-time LCHS list.  She recorded her 1,000th point on December 9, 1988 during her junior season.  She was selected to the Courier Journal third team all-state team following her senior season.

She currently holds the record for most points scored in a single game as she lit up Etown High School for 55 points on February 5, 1988.

Please help us honor Lisa Phillips and thank her for her contributions to the Lady Hawk Basketball program. 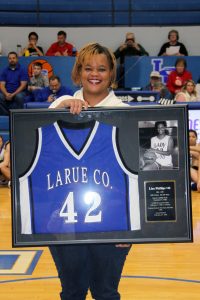 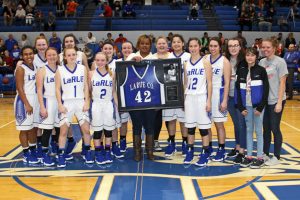 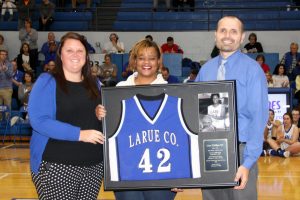