For the first time since 2004 the boys and the girls’ cross country teams have made it to the state cross country championships. The LaRue County Girls Cross Country team were the last group to compete at Hardin County Fairgrounds Saturday in the Region 2, Class AA Cross Country meet.  The girls finished fifth out of the eleven Region 2, Class AA teams (83 participants).  Like the boys team, the Lady Hawks had to battle the course conditions after five groups raced before them.

Senor Clair Keller reflects on the region meet experience, “The course in general was great, just the rain the day before really impacted the approach we as a team had to take. In a few areas the ground was very muddy and loose, the previous races before us really mad those few spots hard to run on. The most challenging part about the course was the last 300 meters, it was a complete mud pit and trying to find some grip to keep our stride pattern was almost impossible.”

When asked what was going through her mind about qualifying for state, Keller admits, “My nerves were everywhere and I couldn’t believe that all our hard work payed off. We were all ecstatic and some tears of joy were shed. But it’s been a struggle this season and previous seasons. But throughout all of my setbacks and injuries I’m just glad I had a supportive family and amazing teammates to help keep me going mentally and physically.”

Head Coach Jamie Hardin wants the same approach at state as it was in the region meet.  “But, our main focus will be tackling the hills and making sure we are driving our knees and keeping our form. It’s also going to be crucial for us as a team to keep a positive mindset throughout our run. Spectators often don’t realize the struggle each runner goes through and keep a positive mindset throughout the whole race is one of the hardest things runners deal with.” 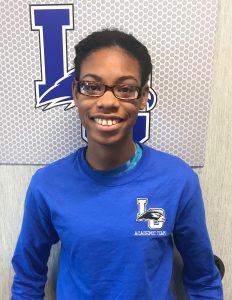 Jada Hunter-Hays 10th grader, 10th place @ 22:31.42, earning her first trip to the state cross country meet.  Coach Jamie Hardin comments – She has a great season, showing consistent improvement and will continue this into the next week at the KY Horse Park.  She had a personal record on this course and hope that she continue her competitive drive next weekend. 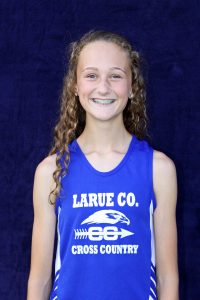 Laila Gross- 9th grader with a 12th place @ 22:32.76. Coach Jamie Hardin comments – She has been making great improvements over the last few weeks she had been focusing volleyball and cross-country both.  When her volleyball season ended, she devoted more time into cross country, which turned out in her favor.  Her times came down and she had success at several meets.  She will be making her first trip to the state meet. 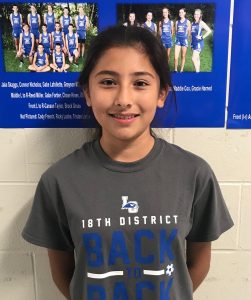 Leticia Salazar – 7th grader with a 39th place @ 24:29.22.  She has been a great addition to the team.  Coach Jamie Hardin comments – I had been trying to get her to run since early in the XC season.  She was devoted to soccer, once soccer was finished. I asked one last time.  She agreed, last week on the same course she ran a 24:51.00.  She is a true competitor, meeting the challenges of the course and the competition.  She will be making her first trip to the state meet. 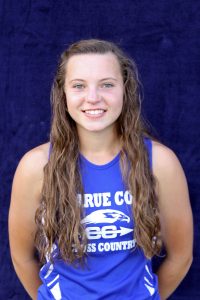 Clair Keller- 12th grader with a 45th place @ 24:46.78. Coach Jamie Hardin comments – Clair had been splitting her time between soccer and cross-country, thus not getting much time with the cross-country team, especially during the month of October.  Once, the soccer season ended, she has been able to practice with us on a consistent basis.  She had almost a minute improvement over her best time this season at regionals.  She responded will during the race, picking up key places during the last ½ mile of the race.  She will be making her second trip to the state meet. 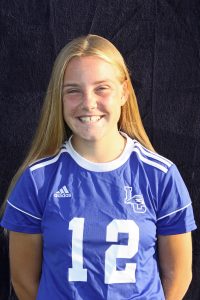 Kirsten Harper- 11th grade with a 47th place @ 25:08.36.  Coach Jamie Hardin comments – She had a 1:40 improvement over her season best.  She was another dual sport athlete, with soccer and cross country.  She with her big improvement between her races, was one of the keys to making it to the state championships next week, as she was our 5th place team runner (last scoring position).  She really enjoys running and I have hopes that she will continue to split her time with us, when she is involved in other sports. 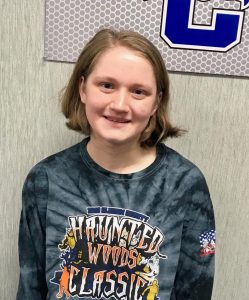 Avery Murray- 9th grade with a 58th place @ 26:53.12.   Coach Jamie Hardin comments – I made a request of Avery, to compete in the regional meet to get us to the state championships as a team.  We established a goal for her going into the race that she would be our “push-back” runner, meaning she was going push the other teams runners back positions to ensure our chances to make it as a team to state, as well as a time goal of under 27 minutes.  She did just that.  I couldn’t be more proud of her for stepping outside her comfort zone and compete. 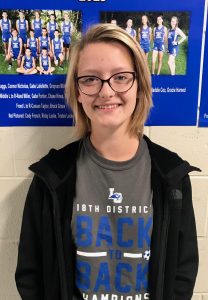 Kayla Maupin- 8th grade with a 59th place @ 26:53.48.  Coach Jamie Hardin comments – Kayla was also a dual sport athlete- balancing soccer and cross country.  She has been improving each practice and throughout the season.  She didn’t have her best race during the regional meet, however she still met the goal established for the team.  She had a five minute improvement during the season.  This will be her 1st state meet appearance. 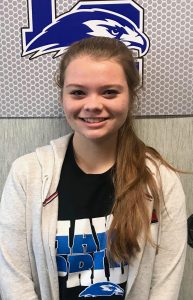 Abi Gibson- 10th grade- did not compete at regionals.  Coach Jamie Hardin comments – Abi will be running at the state meet.  She has had a four minute improvement this season.  And, will no doubt make another improvement on Saturday.

Hardin reflects on the season, “My goal at the start of this season was to take the girls back to the state meet as a team.  It was a long process, we have fought thru injuries that have taken us down to four runners (not enough for a full) team, to getting nine runners that were all capable to racing in the regional meet.”

Hardin continues, “We had steadily move up in the region rankings all season.  Our team focus at the regional was on three teams- Nelson County, Warren East and Bardstown.  I knew if we could stay close to them, we would have a great chance at going to state.  One thing that each girl was asked to work on was mentally preparing for the race; visualizing performances; going over the course in their heads, and working on key parts of the races that each one had struggled with during the year.”

Hardin is looking forward to the State meet.  “I am excited to what this weekend has in store for the girls.  Never having raced on the new horse park course is going to be part of the challenge for these girls, running out of their comfort-zones another, and the final is to mentally push past their pain and give it all they got.  Some runners when they make it to the state meet, think that is it.  They need to continue to work towards PRs in their races.”